Pickford — The undercover officer followed Kurt Johnston Duncan to his “bait pen,” about 200 yards from his cabin along a marsh.

Two bald eagles lay among the deer remains. One eagle was still in an illegal snare meant for a gray wolf or another predator.

“What do you do, ya know?” the officer said. 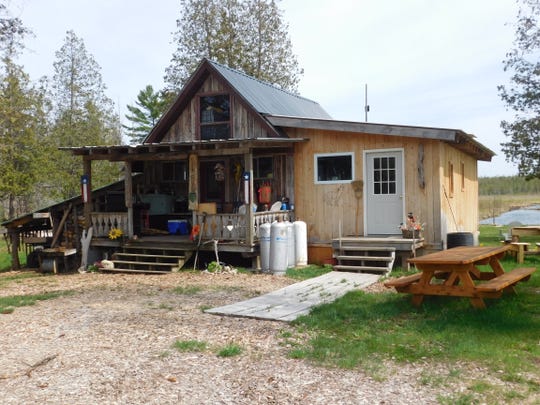 “Kick ’em over in the woods,” the trapper replied, according to court records. “Pay your reverence and pitch ’em.”

The cabin is about 12 miles from his home in Pickford, a tiny community surrounded by farmland in the eastern Upper Peninsula and home to what authorities say is Michigan’s most prolific poacher of endangered wolves in modern times.

The animals were killed about 25 miles south of Sault Ste. Marie, on his 40 acres and at a nearby sheep farm, authorities say.

The local prosecutor threw the book at him.

“This is believed to be the highest number of wolves poached in Michigan by one defendant,” said John Pepin, spokesman for the Michigan Department of Natural Resources.

Duncan is also accused of unlawfully snaring or trapping 19 coyotes, eight foxes, two white-tailed deer, one bobcat and one turkey — 49 animals in all.

The court released 27 pages of sworn affidavits last week after The Detroit News challenged their absence from the official file. The DNR subsequently provided copies to the court on June 1.

The affidavits allege Duncan sold pelts for “lodge décor” and he and his wife, Linda, 61, made jewelry from fangs and mittens from hides. The snares did not have devices meant to limit animal suffering, the charges claim.

Duncan was released after his May 20 arraignment on a $500 cash bond after pleading not guilty in Sault Ste. Marie’s 91st District Court.

“We’ve been advised by our lawyer not to say anything,” Linda Duncan said. She indicated her husband did not wish to speak.

His lawyer, George Tschirhart of Cheboygan, did not respond to a request for comment.

But accusations Duncan killed wolves are not particularly troubling to some townsfolk.

“Everybody up here doesn’t really care. They don’t like wolves,” said Tom Ball, Pickford Township’s supervisor. “It’s like with drunken driving. You don’t shun someone from the community because they get a DUI.”

The probable-cause affidavits, used by the DNR to search for evidence, portray Duncan as disdainful of protected species, dismissive of regulations and proud of his trapping and craft-making skills.

The documents contain vivid dialogue between Duncan and the detective at Duncan’s home, in his cabin, even touring a trapline. Among Duncan’s alleged comments:

Conservation Officer Joel Lundberg was brought in from the Lower Peninsula. A southwest Michigan fur buyer was about to hit eight U.P. cities in three days. St. Ignace was the first stop on Feb. 20. Duncan and his wife, Linda, were there.

So was Lundberg. The investigator made small talk and fast progress.

According to the affidavits, the investigator and Duncan talked again by phone a week later on Feb. 27. “How about that frickin’ alpha male you were playing chess with?” he asked Duncan, who a week earlier bemoaned a big wolf had eluded him.

“I got him,” Duncan responded. “He is huge … and I tell ya, we tanned it. He is all tanned, and on the tail, there’s a little bit of, it’s not like it’s perfect, he is still damn beautiful, and ah I would make ya a hell of a deal on him, like a couple hundred bucks I would let him go for.”

The next day, the detective went to the Duncans’ ranch-style home on the outskirts of town and paid $200. 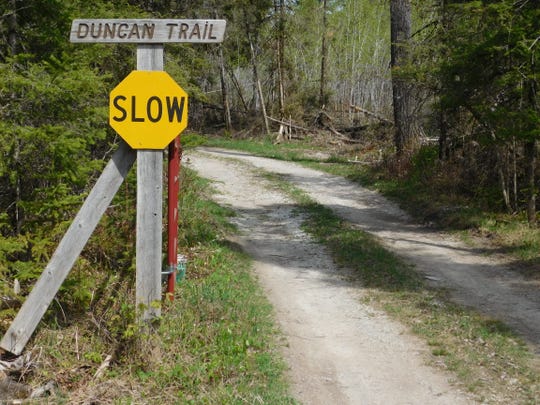 “Tell them you bought it from f—– North Dakota,” Duncan allegedly said. “You bought it at a garage sale. … Give them a line of b—s—.”

The officer also paid $100 for a necklace Duncan said was made from the wolf’s canine teeth. They drove to Duncan’s cabin 12 miles southeast of town to retrieve it, the affidavits say.

The cabin is set about 250 winding yards through dense woods on Duncan’s 40 acres. A U.S. flag waves from the back porch overlooking a marsh fed by Hannah Creek. Duncan would be charged for allegedly taking four wolves here.

The investigator stepped into the entryway and was greeted by the skulls of a bobcat, fox, coyote and two wolves, set on a shelf.

“Linda does those out,” Duncan explained, according to the affidavit used later to search his cabin. “We craft, there’s nothing she or I can’t make.  What I like is when a guy like you gets a necklace and thinks it’s f—– sweet.”

He showed the agent a shelf in the living room. On it, a clear container allegedly held four wolf teeth from a “big alpha female” and others from coyotes.

The men met again two weeks later and toured a trapline about two miles away. All snares were illegal, at least 25. Mandatory devices meant to limit entanglement and suffering were absent, as was identification on each, according to the criminal complaint.

On the return to the cabin, Duncan allegedly called himself a “hired gun” and said people contact him to help with wolf and coyote problems. At the bait pen, he allegedly pitched aside a third dead eagle near a foothold trap. 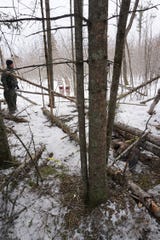 No charges for eagles

The searches were done five days later. They yielded items, including:

Duncan’s limited potential jail time is far less than the DNR originally suggested in its May 20 announcement.

The department also said Duncan was charged with “killing and disposing” of the three bald eagles. But those charges haven’t been brought in court, and no reason has been given by the DNR or prosecutor.

“At the request of the Chippewa County prosecuting attorney involved in this case, we will refrain from answering further questions at this point in the criminal justice system process,” Pepin said.

Charges for the three eagles could yet be brought, he added.

If so, Duncan would face no more jail time than he does now. The offenses are 90-day misdemeanors.

Duncan also was not charged under federal laws that are more punishing. A first offense of the U.S. Endangered Species Act is punishable by up to one year behind bars. The maximum fine is $50,000.

Federal judges also have the power to increase prison time significantly. They can choose to have guilty parties serve their sentences consecutively, one after another. Sentences handed down at the same time in Michigan are served all at the same time, concurrently. 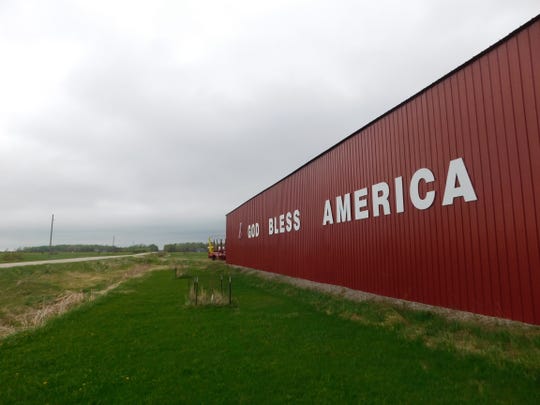 This large pole barn outside Pickford sends a message to all who wander off M-129 through town. (Photo: John Barnes)

“Holy smokes. As serious as this offense?” said Ed Lundborg of Reed City, the National Trapper Association’s Michigan director. “That’s not going to deter things very much. That whole scenario is kind of a black eye for the trappers.”

The state was in a hurry so evidence could be saved, DNR spokesman Pepin said.

Pepin would not say why.

“The DNR needed search warrants in a short time frame so that we did not lose evidence and could put an end to the illegal activity,” he said.

The charges were brought in state court because the DNR did the investigation and sought the warrants in state court, Pepin said.

“Nothing precludes the federal government from bringing its own charges against the defendant as well,” he added.

The U.S. Attorney’s Office in Grand Rapids did not respond to a request for comment. Neither DNR Director Dan Eichinger nor Law Enforcement Division Chief Gary Hagler would comment on whether the state penalties are sufficient.

“I am only able to charge under the laws of the State of Michigan,” said Chippewa County Prosecutor Rob Stratton, who needed19 pages to list the charges he brought.

“You would have to ask the U.S. Attorney’s Office why they are not pursuing charges through the federal system.”

An official with the Michigan Supreme Court confirmed the charges Duncan faces carry sentences that must be served concurrently.

“It is possible that the defendant may only spend five total days in jail if he is given the lowest permissible jail sentence for every offense, but he will get a fine for each individual sentence,” according to a memo provided by communication director John Nevin.