With fewer than three dozen red wolves remaining in the wild on the Albemarle Peninsula in Eastern North Carolina, the federal agency that oversees them will consider a change to the existing regulations governing the 30-year-old red wolf recovery program.

Supporters of the program that reintroduced the federally endangered animal into the wild said a change to the current rules would imperil their existence.

But opponents – many of whom are residents of the peninsula – said they hoped the Red Wolf Recovery Program administered by the U.S. Fish and Wildlife Service would soon come to an end. The federal agency manages wildlife refuges and protects federally endangered species.

On June 28, the U.S. Fish and Wildlife Service proposed a rule change that would remove management efforts from private lands and focus the program on a small range limited to public lands in Hyde and Dare counties. The agency accepted public comments during an extended window this summer. Based on those comments and a four-year study, U.S. Fish and Wildlife will choose among four management alternatives that may seal the fate of the red wolf in the wild.

Currently, an estimated 30-35 wild red wolves are protected and managed in a five-county area in a rural section of Eastern North Carolina that includes portions of Dare, Hyde, Tyrrell, Washington and Beaufort counties. The program began with the release of captive-bred red wolves in the 152,000-acre Alligator River National Wildlife Refuge in Dare County in 1987. It is the only wild red wolf population remaining on the planet.

Ron Sutherland of Durham, a conservation scientist with the Wildlands Network, said the red wolf program is extremely popular. A 2016 poll conducted by Tulchin Research found that 81 percent of North Carolinians and 64 percent of people living on the Albemarle Peninsula think the government “should make every effort” to help the wild red wolf population and prevent its extinction. According to an analysis by a coalition of conservation groups, 99.8 percent of comments submitted to U.S. Fish and Wildlife supported recovering the red wolf in the wild.

According to Sutherland, however, the agency has already scaled back its oversight of the program and has failed to adapt management strategies for changing threats. For example, he said, U.S. Fish and Wildlife has suspended the release of more wolves since 2015.

“They have sacrificed their own program,” Sutherland said. 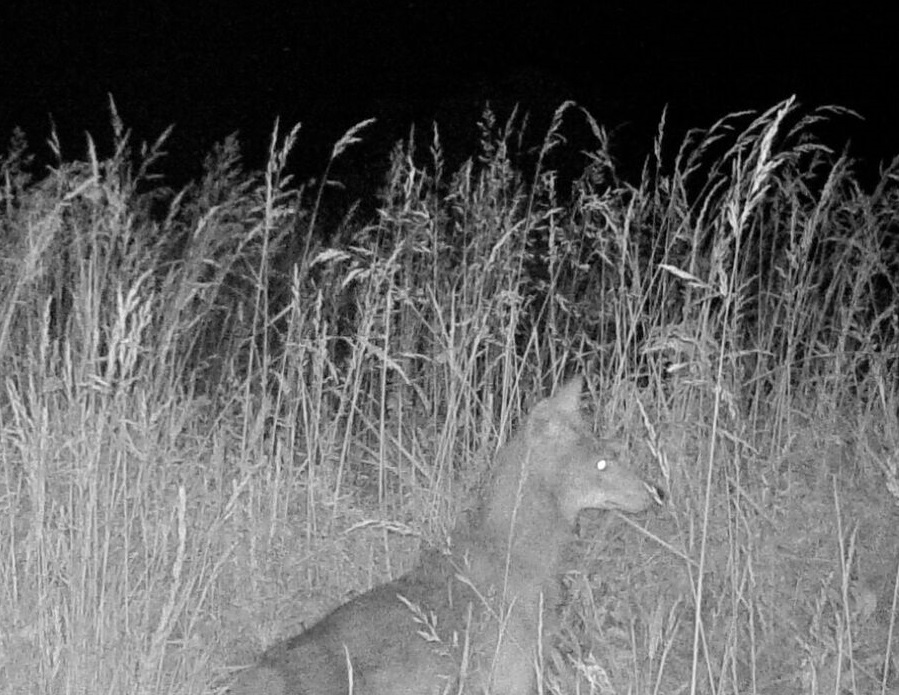 The red wolf population peaked at roughly 150 in the mid-2000s. Experts suggest that the decline in population is related to two primary threats: mating with coyotes, which diminishes their genetic distinctiveness, and “anthropogenic” mortality – deaths resulting from contact with humans. A 2017 study published in the Journal of Wildlife Management found that between 2007 and 2017, the leading cause of death became car collisions and gunfire.

Coyotes, which were rare in the region at the onset of the program, are now abundant on the Albemarle Peninsula. Hunters have unknowingly killed wolves after confusing them with coyotes. However, critics say some hunters have targeted wolves.

According to Sutherland, the population crash has paralleled declining government support for the program that has come to a head in the last several years.

In 2016, U.S. Sen. Thom Tillis, R-N.C., called for an end of the program. In a July 30 letter to the U.S. Fish and Wildlife, Gordon Myers, N.C. Wildlife Resources Commission executive director, urged the agency to terminate the program.

Marco Gibbs, a commercial fisherman, hunter and trapper in Engelhard in Hyde County, is also in favor of ending the red wolf recovery program. While tourism is an economic driver in portions of the Albemarle Peninsula, generations of local residents have also made a living from timber production, fishing, hunting, fur-trapping and agricultural.

Gibbs said the introduction of red wolves has disrupted the balance of creatures living in the region, among them deer. Gibbs said he believes the deer population began to slide in 1995, and thus earning a living from guiding hunters has taken a hit in the region.

“The wolf hurt us bad,” Gibbs said. “When the wolf moves in, the deer either have to leave or they die. Some, but very few, learn to live around the wolf.  When (the government) released the wolf, they started working on the small game and then graduated to deer.  Whatever they acquire a taste for, that’s what they go for.”

The state Wildlife Resources Commission has gathered data showing that the number of deer harvested by hunters in Dare County fluctuated between 1976 and 2012. The smallest harvest was in 2002, and the largest harvest occurred in 2012. But over the last several years, the number of deer harvested has declined. The trend in Dare County roughly parallels numbers throughout the five counties on the Albemarle Peninsula over the identical stretch of time. 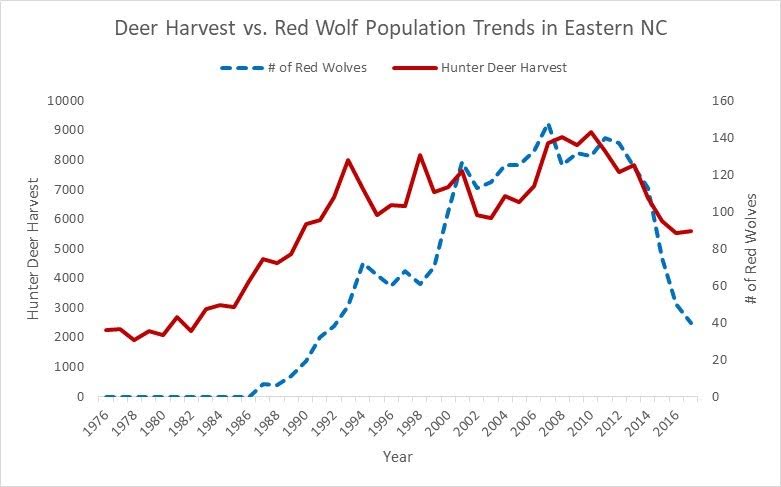 The argument that wolves have caused a decline in the deer population, Sutherland said, doesn’t pass muster.

“While the deer harvest has been in a down cycle, 20 percent more deer were harvested in the five-county region in 2017 than in 1987,” he said, adding that a range of factors may instead be responsible for the recent decline in the deer population, including disease or the presence of other animals, such as black bear and coyote.

Sutherland has also often heard the argument that protecting the red wolf is hopeless since coyotes have taken over its range and have bred with wolves.

He said so-called “hybrids” are rare and that the increase in coyote population on the peninsula may be related to the wolves’ decline.

“As the wolves have contracted, the coyotes have invaded those territories,” Sutherland said. “We’ve found evidence that the wolves were capable of keeping them out. The net effect of losing wolves was to open up more territory on the peninsula for coyotes.”

Although Gibbs backed the program in the late 1980s, he said support among local hunters began to decrease in the early 1990s.

Animosity may have begun among rural residents when farmer Richard Mann shot and killed a red wolf that he believed threatened his livestock. While Mann pleaded guilty, local support led to nonbinding resolutions opposing the red wolf program in Hyde and Washington counties and led to proposed legislation in 1994 in the General Assembly that permitted killing wolves on private property under certain circumstances.

Gibbs also said that at the onset of the program, U.S. Fish and Wildlife promised that the red wolves would be limited to the Alligator River National Wildlife Refuge, which overlaps the Dare County Bombing Range.

“They lied to us,” Gibbs said. “Even if the wolf was the greatest thing since iced tea, it would be hard to get trust back in (U.S. Fish and Wildlife). The majority of the people turned on the wolf program. Rightfully so. They were taken advantage of.  It was a big wasted experiment. And I would hope that they shut the program down and call it done. We were naive to listen to them and allow them to bring the wolf in the first place.”

Along with Gibbs, wildlife biologist Mike Phillips lived in the Albemarle Peninsula when the first six wolves were released from captivity in the spring of 1987. Phillips was the field coordinator of the Red Wolf Recovery Program from 1986-94 and is currently director of the Turner Endangered Species Fund. He also serves in the Montana state legislature.

Phillips said in an email to Carolina Public Press that he is sympathetic to the perception that some residents felt deceived by the federal government.

“The original plan in the mid-1980s called for restricting wolves to mainland Dare County,” he said. “But within weeks of releasing the first wolves in 1987, it was apparent that the area needed to be expanded.  That was largely achieved with executed agreements with landowners and authorized changes to the original plan.”

Phillips said any “real and valid concerns held by those who feel slighted” are possible to address.

“But I’m also keenly sympathetic to the plight of the red wolf – and all other imperiled species – and the important demands of the Endangered Species Act,” he said. “I feel no sympathy for anyone who shoots a red wolf under the belief that it was a coyote.”

Sutherland said the conservation community should have been more proactive in addressing some of the allegations and concerns over the program sooner.

“There wasn’t anyone on the ground to respond and push back in terms of attitude toward the wolves. What was needed was a broader level of public outreach,” Sutherland said. “We’ve been there quite a bit doing field work, but not enough time engaging with folks.”

“The perception is that the conservation community only cares about the wolves and not the people or land,” Sutherland said.

In July, his organization hired a local outreach person to listen to residents “and see what the challenges and real problems that are associated with wolves and coyotes.”

He’s also pushing back on the narrative that no locals support the program.

Washington County landowner Jack Spruill said he remains in favor of keeping the red wolf. Spruill grew up in the small Washington County community of Roper,  then retired to Wilmington following a career in banking and management.

He owns a 110-acre farm near Roper that his grandfather purchased in 1914. “We would be very pleased if our farm were included in the range of the red wolf,” he said.

Sutherland said expanding the program to include willing landowners and continued management beyond federal land is necessary for the red wolf to survive.

“I do know that U.S. Fish and Wildlife greatly underestimated the amount of land needed to build a sustainable wolf population,” Sutherland said. “If we want the red wolf to join the bald eagle and the American alligator in the ranks of recovered species, they need to survive on private land in the Southeast.”