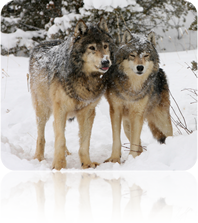 Wisconsin has reached another milestone in the management of wolves: on January 27th the U.S. Fish & Wildlife Service – for the 4th time since 2003 – has officially delisted the species in the three-state region of Minnesota, Wisconsin and Michigan (the previous attempts were successfully thwarted and decisions reversed in federal courts by lawsuits). In a matter of days following this pronouncement, the Wisconsin State Legislature introduced legislation authorizing a public wolf harvest.

This move is heralded by many Wisconsinites who harbor great concerns over the wolf’s return, while others are shocked, holding to the view that this species is and remains on the brink of extinction. One thing is certain: This legislative action will certainly stir the pot of emotions that comes with mention of the word “wolf”.

Just what are the landmarks in Wisconsin’s history of wolf management?

In Wisconsin the wolf’s continental range collides with a landscape crowded with humans, their diversified means of earning livelihoods, and the various forms in which our citizens recreate in the outdoors. Over the past 30 years Wisconsin has paid out nearly $1,000,000.00 in damage claims for wolf depredations on livestock and dogs. Wolves in the past 30 years have reclaimed nearly all Wisconsin’s remote habitat – which scientists refer to as “core” habitat – and are spilling out into farming regions. Please do keep in mind, Wisconsin is still known as America’s Dairy State! Depredation claims are rising. The state’s wolf population is rising. Dealing with conflicts this inevitably creates is a necessity; a requisite to maintaining a viable wolf population. This is the world into which the wolf has stepped over the past 30 years. Like most wildlife species, wolves require managing.

Wildlife management is all about controlling the size of animal populations and their distributions. Right now wolves cause problems on about 30 – 50 farms annually. As the population increases, so will the size of this problem. Wolves are extremely territorial creatures: they kill hunting dogs legally pursuing game animals. And in some rare cases they cause public nuisances by becoming acclimated to humans. All of these are issues of concern, and management is the proper response.

Among the tools in a manager’s tool kit is the matter of “take” – the act of killing (and thus removing) individuals from a population to address one or more of these areas of concern. Hunting and trapping are acknowledged and generally widely accepted forms of recreation for Wisconsinites. Therefore it is logical that the state legislature is taking on this issue.

TWIN is an educational organization. We make every attempt to remain neutral in wolf issues that are both politically or emotionally charged. This presents a difficult row to hoe for its members on occasion. Many people have contacted TWIN Board Members in the weeks since this legislative action was initiated. Some “pro-wolfers” question the wisdom of launching such a plan so soon after federal delisting and are suspicious of whom legislators listened to (and didn’t invite) in devising the proposed legislation. Others express great concern over methods of harvesting wolves being authorized under this legislative proposal. And certainly others still are fully supportive of this effort.       This legislation has generated curiosity, concern, and many questions. In this section TWIN presents the bills, information on how to reach legislators and committee members, who wrote or co-sponsored these bills, groups that lobbied in support of these bills, and testimony offered to date.  We have organized this posting into the following categories:

TWIN is a not-for-profit organization composed of volunteers. We endeavor to keep this segment as up-to-date as possible as this legislation moves along. It is inevitable that we may miss some postings, or be tardy in posting timely materials. The onus is on you – the concerned citizens – to keep yourself informed. We hope our site is among those. We hope you will find this information useful to you in helping shape a future for wolf management in Wisconsin.

Thank you for your interest in wolf conservation…