Wisconsin requires non-Chippewa hunters and trappers to obtain a wolf permit to harvest a wolf.  Permits are issued through a 2 stage process. The first 50% of permits are issued through a random lottery in which all applicants are entered. The second 50% of permits are issued based upon the cumulative preference points of applicants which give unsuccessful applicants from prior years a greater chance to obtain a permit.  Each permit allows the harvest of one wolf by any legal method.  Legal methods include trapping with foothold traps and cable restraints, hunting with the use of electronic calls, bait and the aid of dogs.

Wisconsin’s wolf season opens on October 15th of each year. Trapping with foothold traps and hunting with the aid of bait and calls are legal throughout the season. Trapping with cable restraints and hunting with the aid of dogs become legal methods on the Monday following the gun deer season, in 2013 these became legal methods on December 2nd. The state is divided into 6 wolf management zones (Figure 1). Wolf permits authorize hunting and trapping in any open zone.  The Department has the authority to close wolf zones as zone specific quotas are reached. If quotas are not met the season closes on February 28th.

Wisconsin requires state-licensed wolf hunters and trappers to register their wolf using a 2 stage registration process. Within 24 hours of harvest, permit holders are required to inform the Department by phone of the location, sex and method used. This information is used to track harvest by unit and make unit closure decisions.  By the 5th day of the month following harvest, hunters and trappers are required to present the pelt and skinned carcass to the department for final registration and tagging of the animal. The department collects a pre-molar for aging purposes, a genetic sample, and a reproductive tract from females.

(123) of the total harvest. Wolf harvest was distributed across the 6 management units according to unit specific quotas (table 2, figure 2).

Successful license holders are required to submit wolf carcasses to the Department. The primary objective in carcass collection is to obtain biological samples. Carcass collection and handling procedures were designed for this purpose, not as an investigatory tool.  A genetic sample and a tooth for aging was collected from every carcass received.  A reproductive tract was collected from every female.

At the time of registration, both the pelt and carcass are available for inspection by trained DNR personnel conducting the registration. This provides an opportunity to evaluate the animals for evidence of harvest violations. Given the heightened public interest in wolf hunting with the aid of dogs, the Department conducted an additional evaluation of a sample of carcasses to assess potential dog related injuries to wolves.  This evaluation was led by the DNR wildlife
veterinarian, assisted by the DNR wildlife health section chief, an investigative warden, a USDA- Wildlife Services damage specialist, and the DNR large carnivore specialist.

Twenty seven skinned carcasses were examined. The outer exposed tissue layer of the carcasses was severely desiccated.  Due to the condition of the carcasses, subcutaneous hemorrhaging and edema, as well as presence or absence of injuries that didn’t extend further into the muscle layers could not be assessed.  Evaluation of these carcasses was inconclusive. One evaluation was conducted of a carcass with the pelt removed only from the shoulder and head. The cause of death for this wolf was a bullet wound but the carcass showed evidence of minor trauma consistent with bite wounds which occurred prior to death.  Available evidence did not allow for conclusive determination of the species responsible for the bite wounds.  Law enforcement personnel investigated the events surrounding the harvest of this animal and found no evidence of a violation.

Trauma consistent with gunshot wounds was found in all carcasses. 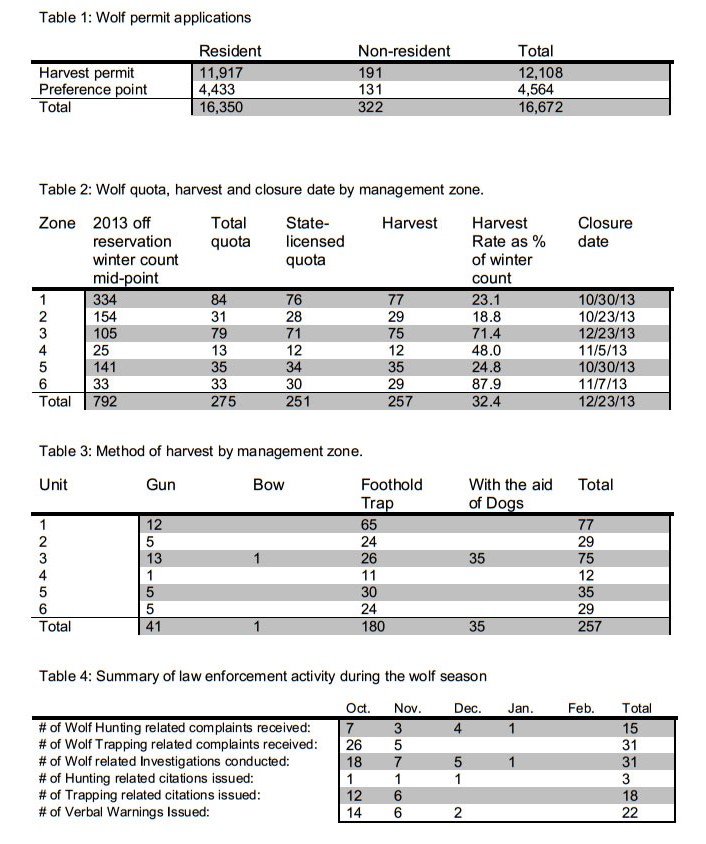 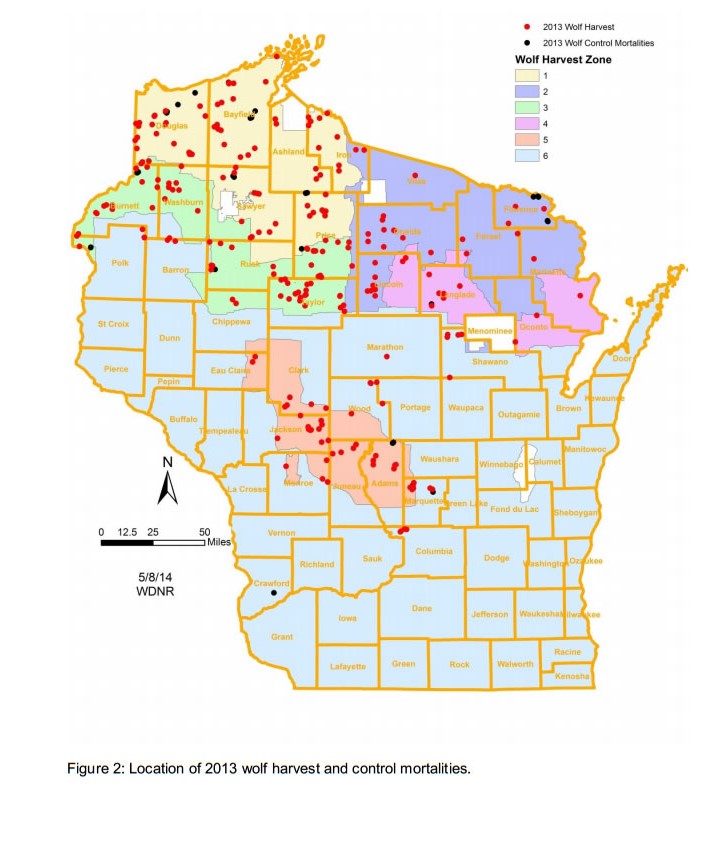 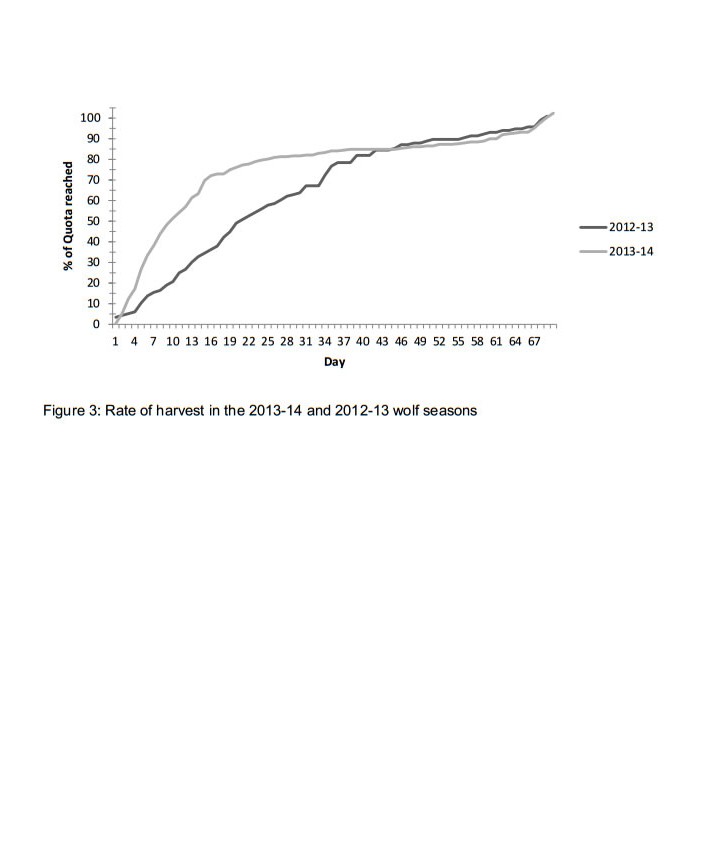