Federal Delisting of Wolves – Federal delisting of wolves occurred on January 27, 2012, following years of de-listings and re-listings resulting from a number of court cases, even though the Midwest wolf population exceeded recovery goals for many years.

Statutory Direction: Act 169 was approved by the Governor in April 2012. This statute authorizes and requires a wolf hunting and trapping season. Numerous season and application details were described in the statute. Act 169 authorized the Department to delineate harvest management zones, set harvest quotas, and determine the number of licenses to be issued to accomplish the harvest objective.

Wolf Season Emergency Rule: Act 169 required that the department draft an emergency rule for implementation of the statute with a 2012 season. After work by the Wolf Season Ad Hoc Team, public meetings, meeting with the Wolf Science Team and Stakeholders Team, review of wolf season public survey responses, consultation with the Voigt Task Force and Great Lakes Indian Fish and Wildlife Commission (GLIFWC) staff and attorneys, consultation with other tribal representatives, and public testimony to the Natural Resources Board (NRB), the emergency rule was adopted by the NRB on July 17, 2012.

Harvest Goals: The goals of the prescribed harvest were to: begin to reduce the statewide wolf population toward the wolf management plan population goal; maintain a sustainable wolf population; reduce conflicts, particularly in areas with the greatest past or potential future conflicts; and learn for adapting harvest management prescriptions in subsequent years.

Quotas and Expected Impacts: The NRB adopted a total harvest quota of 201. University of Wisconsin-Madison modeling predicted a population reduction of about 14% (8-19%) if this quota was reached and other mortality factors occurred as expected. The predicted impacts included the assumption that tribes would take the harvest quota allocated to them, which did not occur. Winter wolf surveys will provide information useful for determining impacts of the 2012 season.

Approach to Zones: Six zones were delineated based on wolf habitat value and human conflict potential. Harvest quotas were set for each zone based on 20% (zones 1, 2, 5), 40% (zones 3, 4) and 75% (Zone 6) of the mid-point of the minimum wolf count in each zone.
Reservation Restrictions: Zero quota areas were established for state-licensed hunters and trappers within the reservation boundaries of the Bad River, Red Cliff, Lac Courte Oreilles, Lac Du Flambeau, Menominee and Stockbridge-Munsee reservations.

Tribal Quota: The department set one-half of the 2012 wolf harvest quota aside for Ojibwe tribes based on Voigt case requirements and based on wolf counts within the area of each zone delineated as ceded territory. This tribal quota amounted to 85 wolves, leaving 116 for state-licensed hunters and trappers.

Licenses Available: The number of state licenses was set at 10 times the quota allocated to state hunters and trappers, based on the expectation that success rates would be better than that seen in Idaho and Montana with the amount of road access and trapping interest in Wisconsin. Approximately 75% of applicants notified of the opportunity to buy a license actually purchased one. Most applicants were residents. Most applicants had purchased some kind of license from the department in the past. The number of licenses purchased and activity of licensees was sufficient to reach harvest quotas in all zones well before the end of the hunting and trapping season.

Known Mortalities by Zone: We have tallied mortalities detected through harvest registration, radio-telemetry, depredation control action reports, and reports from staff and the public. Recorded mortalities were as follows for 2012.

Sex of Harvested Wolves: The harvest was comprised of 59% males and 41% females.
Method of Harvest: Trapping accounted for 52% of the harvest, with hunting accounting for the remainder. Additional information will be available once responses from returned trapper and hunter surveys are summarized. Due to a lawsuit that was not resolved until after the season closed, dogs were not used for hunting wolves in 2012.

Tribal Harvest: The Ojibwe did not authorize tribal members to hunt for wolves. The reported tribal wolf harvest on off-reservation lands was zero.
Expected Mortalities: All detected mortalities were within the levels expected when modeling was used to predict the impact of the harvest quotas on the population. For example, the depredation control harvest of 76 was less than the 10% of winter count mid-range (85). Both the number of reported road kills and reported illegal kills were less in 2012 than in 2011. 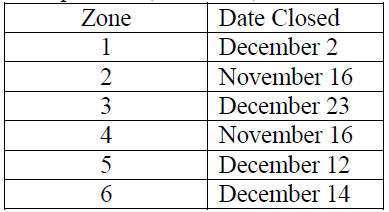 Wolf Harvest Distribution: Wolf harvest was distributed across occupied areas of the wolf zones, with harvest coming from 30 counties.

Wolf Management Revenue: Ear-marked revenues from wolf application fees and license purchases were roughly equivalent to the total costs of depredation compensation and the USDA WS depredation control contract. The revenue was $289,865.50.

Dogs Reported Killed by Wolves: One pet dog and 7 hunting dogs (while hunting bears, bobcats, and coyotes) were reported killed by wolves in 2012.

Depredation Compensation Costs: The amount of compensation to be paid for loss of livestock and dogs is estimated to be approximately $120,000 for the period of April 16 to the end of 2012.

Wolf Carcass Data: Teeth and female reproductive tracts were collected from registered wolves for data on age and reproductive status that will be useful for evaluating wolf population trends and impacts of seasons. Data are not yet available.

Law Enforcement Visits with Public: Wardens across the state reported that they heard overwhelming support from most people they had contact with during the fall and winter wolf season, including both hunters and non-hunters who supported a managed wolf harvest. Overall, the season was a very positive experience for most who participated. Many deer hunters
commented on the importance of having a wolf season to reduce the population and were pleasantly surprised to see the high level of success amongst hunters and trappers.

Wolf Permanent Rule: A request to go to hearings on a permanent rule was approved at the December 2012 NRB meeting as required by Act 169. The Act allows the emergency rule to remain effective until the permanent rule is adopted and gives no deadline for adoption. The draft permanent rule is basically a replica of the emergency rule; however, the department and board will consider amending the rule based on tribal and public feedback. The plan at this point is to hold public hearings in the winter of 2014 and request board approval in June 2014 at the same time as approval is sought for the revised Wolf

Management Plan and the proposed 2014 harvest quotas.
Wolf Management Plan Revision: The department’s goal is to draft an updated wolf management plan for approval in June 2014. Preliminary plans call for gathering initial input from a roundtable of stakeholder group representatives, followed by drafting of a revised plan by a department wolf advisory committee, followed by additional meetings for feedback from the roundtable and through a number of public meetings.

Quotas for 2013: Wolf count data should be compiled in April. The department wolf advisory committee will be asked to develop quota recommendations in late April or May. The Natural Resources Board will be asked to approve quotas in June. The state drawing for hunting and trapping license will occur in August. Tribal declarations will be needed by the end of July. The 2013 season starts on October 15.