ISLE ROYALE, MI – The annual report on Michigan’s Isle Royale wolf and moose populations has been released. And unlike recent years where island-watchers were just waiting to see if the remote island’s last two wolves had survived another year while the number of moose steadily ticked upward, this year’s report has a little drama tucked inside its pages.

There are new wolves to track, intense territorial patrolling by the two old island-born wolves, some bared-teeth rebuffing of incestuous courtship, and even some “unknown” wolf tracks that likely show a group of mainland wolves visited the island for a few days this winter and sampled some moose kill leftovers.

So grab your popcorn and we’ll take you through some of the report’s best highlights.

It’s compiled each year by researchers at Michigan Technological University. This winter, they spent four weeks tracking moose and wolves using planes and skis. Now in its 61st year, it is the world’s longest-running study of a predator-prey relationship.

Yes, there’s the expected rise in moose, this year topping 2,000. Their numbers have been allowed to grow nearly predator-free for years in the face of the island’s dwindling wolf pack. Their population is at near record-high levels, and their browsing diet is putting a big dent in the wilderness island’s vegetation, researchers found.

But the report also highlights some big moments among the wildlife on this Michigan island archipelago, which sits in Lake Superior about 15 miles from the Canadian mainland, and 60 miles from Michigan’s Upper Peninsula.

The National Park Service kicked off a multi-year wolf relocation project last fall in hopes more predators would keep the booming moose numbers in check. The two island-born wolves – an older, related pair that can’t have viable offspring – have been joined so far by 13 new wolves from Minnesota and Canada.

The Michigan Tech team was on the island during a window this winter when the island-born wolves and two new female wolves from Minnesota were there. The new wolves from Canada had not yet arrived, though recent GPS data from their tracking collarsshows how they are all fitting in.

Here are the highlights, new photos, and tracking maps, courtesy of the MTU study:

The only two island-born wolves left from Isle Royale’s old Chippewa Harbor Pack, this father-daughter pair had been the only wolves left on the island for several years.

Their family tree’s DNA is too twisted to result in viable pups. They share the same mother, too, so they are also half-siblings. A pup they had in 2014 was visibly deformed and died at about 9 months old, researchers estimate.

Still, the male, age 10, and the female, 8, remain “tightly bonded and highly territorial,” say researchers, who had good opportunity to study their movements in February and early March.

They were seen spending a lot of time patrolling the east end of Isle Royale, which is considered their home territory.

And as researchers have seen before with these two, the female wolf “soundly rejected the courtship advances of her father during the 2019 mating season,” even showing off her bared teeth, just to make sure she got her point across.

During their winter study, researchers estimated 10 moose kills by wolves, and another 2 moose that died likely due to an accident or possibly malnutrition, between Jan. 21 and March 2.

This means the island’s four resident wolves at that point were likely very well-fed.

A map included in the report shows the moose-kill spots.

During the bulk of the winter, just the two female Minnesota wolves and the island-born wolf pair were roaming the island. GPS trackers and overhead surveys showed the new arrivals were mostly keeping to themselves – and even traveled together at times – but their tracks crossed at enough points where the older wolves were surely aware of the Minnesota wolves’ presence, researchers said:

“The island-born pair remained together at the  east end of the  island. The  two  Minnesota-born  females  remained  alone,  at  the  far  west  end  of  the  island  through  February.  These  two  females,  new  to  the  island,  killed  moose  calves  on  their  own.  They  were unusually sedentary throughout February when mating usually occurs. They may have been positioning themselves for maximum exposure to any males that might travel the shorelines at the west end …  However,  the  male  Ontario-born  wolves  did  not  start  arriving  on the island until the very end of the breeding season and shortly thereafter. The movements and activity of all Minnesota-born and Ontario-born wolves will be closely monitored over the upcoming months via their GPS-collars by the NPS.”

While observing wolf movements on the island, researchers came across some unfamiliar tracks that didn’t originate from the two island-born wolves, or match up to the GPS-tracked movements of the new wolves.

Those tracks also generated some intense interest from the island-born wolf pair, who examined them at length.

Researchers believe these were wolves visiting from the mainland who crossed an ice bridge created by this year’s very cold winter winter weather. They shared a lot of fascinating details about this incident:

“On  February  13,  tracks  of  an  unknown  wolf  were  observed  near  Daisy  Farm,  the  day  after  the  island-born  pair  had  been  observed  scent-marking  the  same  area.  On  February  19,  the  island-born  pair  was  observed  in  Lane  Cove  inspecting  tracks  that  appeared  to  have  been  left  by  an  unknown  wolf, possibly different from the first unknown wolf  as  its  tracks  were  very  large.  (We  investigated  both  sets  of  tracks  from  the  ground—giving  us  reason to think they were left by different-sized wolves.)

“On the same day, 10 miles to the southwest of Lane Cove, we followed tracks of three wolves off and on for 50 miles, beginning along the north shore of Isle Royale, then continuing all the way to the southwest end, on and over a couple offshore islands, around to the south shore of the island where the wolves fed on a  moose  carcass  (which  probably  died  from  malnutrition). The tracks then continued along the shore to Houghton Point, at which point the tracks were lost as they crossed the vast expanse of ice covering Siskiwit Bay.  The  island-born  pair  spent  much  of  February  19-25 patrolling their territory, following the unknown-wolf tracks and leaving prominent double  scent-marks  along  the  way.

“During  the  week  that  remained of the winter study, we flew the shorelines and much of the eastern interior, but found no more tracks that appeared to be from unknown wolves. It can be difficult to draw inferences from observing  tracks  when  those  tracks  do  not  lead  to  directly  observing  the  wolves  that  made  them.  However,  it’s  highly unlikely that these unknown wolf tracks could have  been  left  by  either  of  the  two  Minnesota-born  female  wolves  because  GPS  data  from  these  collared  wolves  places  them  at  the  other  end  of  the  island  during  this  period.

“Our  best  (though  fallible)  inference is that several wolves arrived to Isle Royale by  crossing  the  ice  bridge  and  then  returned  to  the  mainland  after  spending  approximately  a  week  on  Isle  Royale  in  February.  If  that  inference  is  incorrect  and one or more of these putative wolves remained on Isle Royale, then there is a good chance of detecting their presence within the next 12 months through fecal DNA. Alternatively, if one or more of these putative  wolves  contributes  reproductively  to  the  island,  then  that  contribution  will  eventually  be  detected  through the fecal DNA of their offspring.” 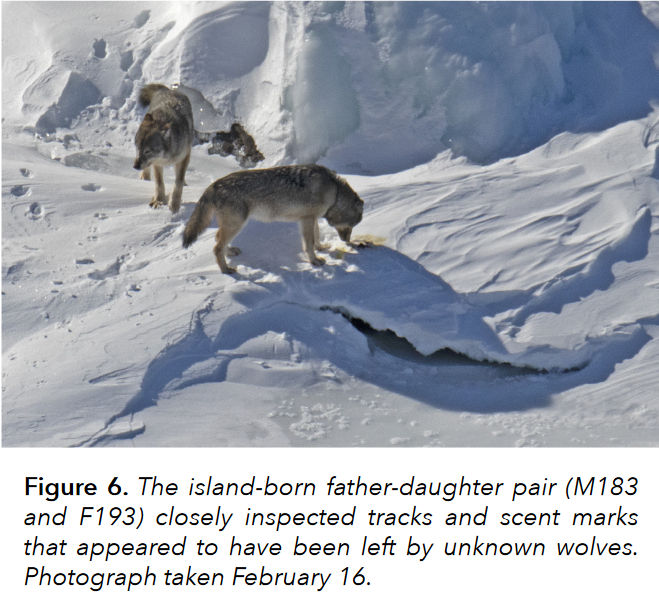 Ice bridges have been used occasionally by wolves to access Isle Royale dating back decades that researchers know of – and possibly long before that.

It’s how the island’s first known wolves are believed to have walked there in the 1940s.

It’s believed to be the gateway for this winter’s “unknown” wolves to have visited for a week or so.

And it’s how one of the newly-transplanted wolves decided to go back to the mainland this winter. At the end of January, one of the three initial female wolves from Minnesota used an ice bridge created during the Polar Vortex freeze to travel back toward Canadaand Minnesota. Researchers tracked her via her GPS collar, and the Michigan Tech group followed up with a fly-over, seeing her tracks in the snow leading off the island and over the frozen ice, headed north. 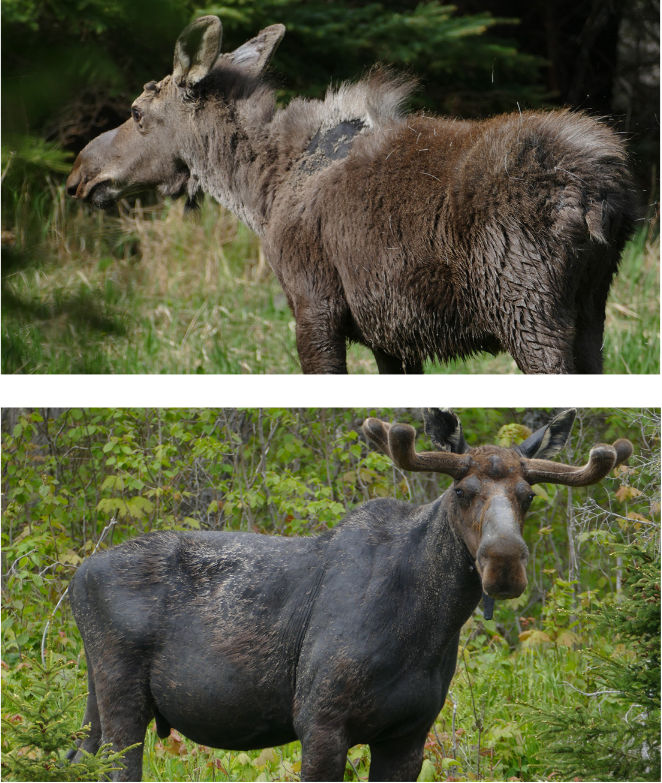 Just as most people expected, the winter survey found a booming moose population on the island. The latest estimate is 2,060 moose packed onto the 206-square-mile archipelago.

The island’s balsam fir that makes up a good portion of the moose diet is suffering from the effects of their over-browsing, the report found. This underscores concerns that the large moose population is damaging the island wilderness

“We expect there might be a slowing down of moose population growth next year, at least at the west end of the island,” Sarah Hoy, an assistant research professor, said in an MTU news release. “The moose have severely damaged much of the vegetation they rely on during winter on the western end of the island.”

The fir tree effects were described in this sampling included in the study: “In 1988, 473 mature balsam fir trees were tagged on the western end of the island. Only 28 (6%) of those tagged trees remained in 2018. ”

To better study the island’s moose, 20 female moose were outfitted with GPS tracking collars. An early map of their travels is included. 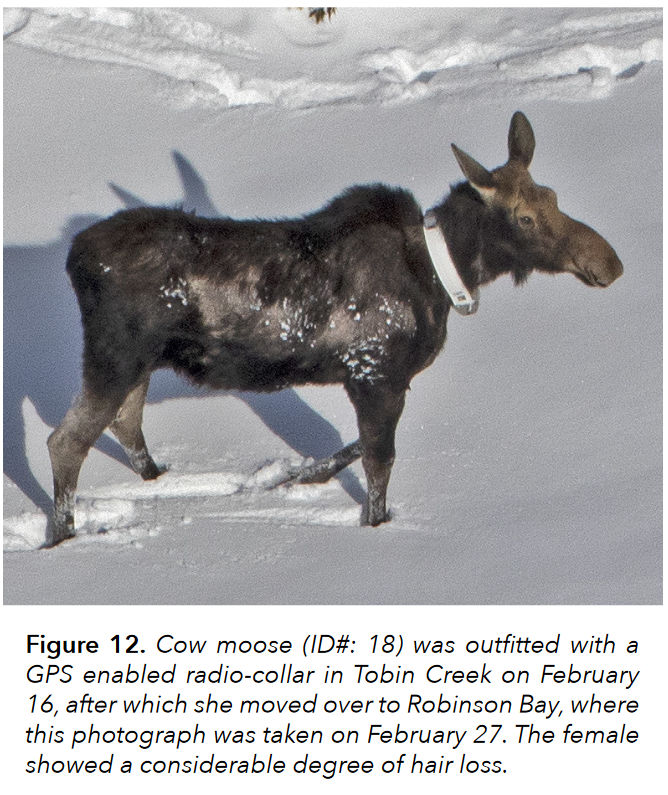 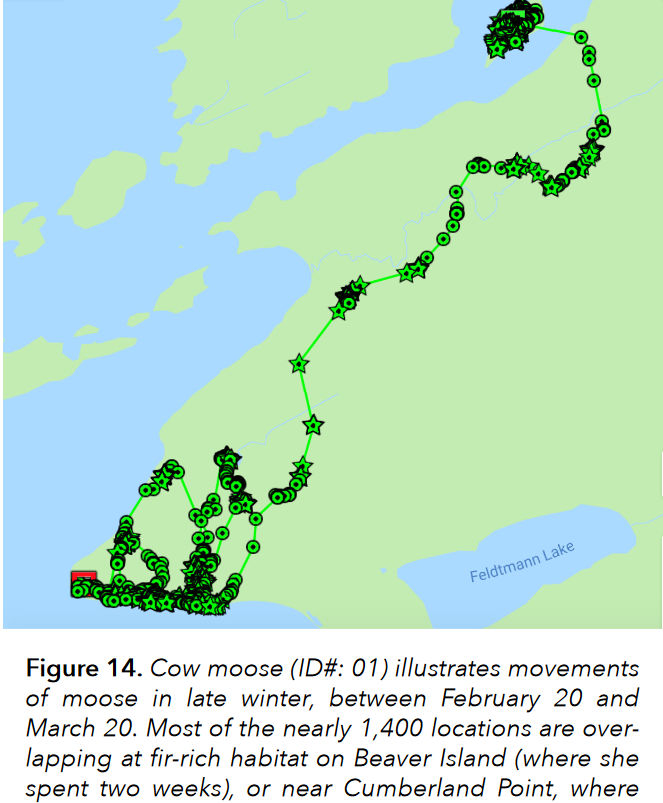 Isle Royale’s beaver population has steadily increased since the wolf pack’s collapse in 2012. Wolves eat moose, but they also supplement their diets with beaver meat.

“An  aerial  count  of  active  beaver  colonies  was  conducted  by  Rolf  Peterson  (observer)  and  Don  Murray  (pilot), using float-equipped Aeronca Champ aircraft in  October  2018.  The  2018  survey  resulted  in  the  highest  estimate  of  active  beaver  sites  ever  recorded for Isle Royale, 541 sites, which is consistent with the increasing beaver population documented since 2012.” 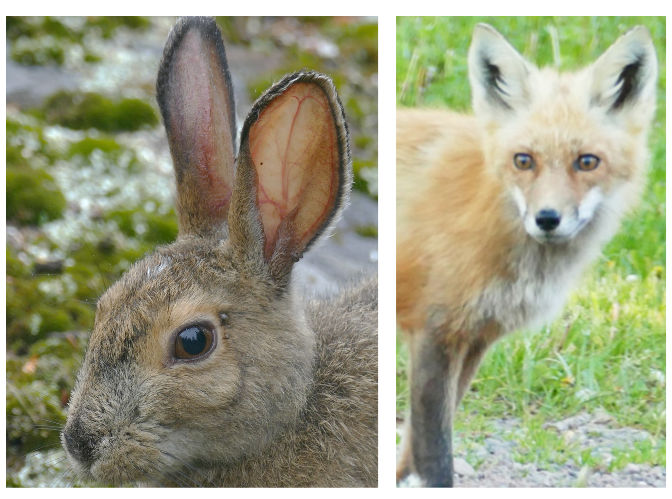 The study says: “Red foxes  were  relatively  uncommon  in  2018–2019,  as  were  their  primary  prey,  snowshoe  hares. Foxes are expected to fare much better over the winter as the wolf  population  grows  and  provides  more  moose  carcasses  that  can  be  used  by  scavengers, such as foxes and ravens.”

For a remote island, Isle Royale has a lot going on. If you want to read more in-depth stories about its wolves, its history and what it has to offer, check out these features:

The mysteries of Michigan’s Cemetery island.

Why moose were trapped, crated off this Michigan Island.