SALISBURY  – During a recent exam, one of the three new red wolf pups at Dan Nicholas Park wanted to let everyone know he was indeed a wolf, growling with his mouth open at the staff.

Despite the little guy’s best efforts, he didn’t have any teeth. 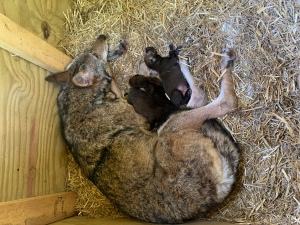 Red wolf Magma with her pups.

The pup and his two sisters, all born in April and currently without names, are being raised by the male and female at the park, Clay and Magma. The parents are 4 years old. Clay was sent to the park in 2018, and Magma made her way to the park from Washington via plane in December.

Megan Cline, a naturalist and animal care specialist at the county-run park, said the pair got along well when they met. So well, in fact, that they had babies. Cline confirmed the puppies are cute.

“Realistically it is probably a much lower number than that,” Cline said. 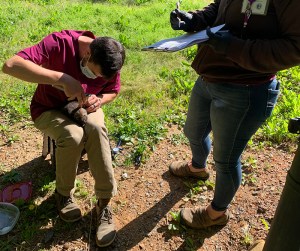 This was one of five captive litters of wolves born in the U.S. this year. One of the three new pups at Dan Nicholas is adopted from another captive pair and is three days older than the two born to Clay and Magma on April 17. The adopted pup was the only survivor in a litter of eight.

The wolves are raising the pups in a den box and will be together for the next year. The pups are not being hand reared, though they do get medical checkups.

Red wolves are unique in the canid world. They are not like domestic dogs that will mate any time of year. The wolves only mate January through February, they are only found in the Southeast and the wolves live as family units rather than forming packs.

In the wild, the wolves form monogamous pairs and families take care of one another. When they become adults and are ready to leave the family, they go off to start their own families.

The nationwide captive breeding program began after a group of 14 wolves were captured in the 1960s and held for breeding. The program is a collaboration between the Association of Zoos and Aquariums, and the U.S. Fish and Wildlife Service.

“There are less than 300 left in the world,” Cline said. “And that’s an animal that’s here, in our own state, practically in our backyard. Typically, when people think of an endangered species, they think about animals in another country. They don’t think about animals here in North Carolina.”

Cline said the original plan was to look at the genetics, prepare animals for breeding and then reintroduce wolves to the wild once the captive numbers had reached a sustainable level. The program, the Red Wolf Species Survival Plan, managed to increase the number of wolves in the wild to about 180. There was even a litter born at Dan Nicholas in 2005, and three of those wolves went to a foster den in the wild to be raised. However, recently the numbers began to decline, something Cline attributed to human interactions and coyotes. 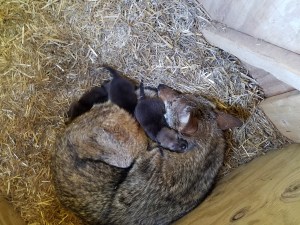 The new pups with their wolf parents.

Coyotes compete with red wolves for food. If there are not enough red wolves in the area, the wolves will breed with coyotes and result in the birth of sterile hybrids. There has also been political opposition to reintroducing wolves, and the program is currently not releasing them into the wild.

The current goal of the program is to increase the number of wolves in captivity to safeguard the species.

Chris Lasher is the coordinator for the survival plan. He works at the N.C. Zoo and has been working with red wolves for the past 30 years. Lasher said the program’s 41 partners manage the population as one group rather than each facility managing the wolves they have alone.

The wolves are moved around often rather than being allowed to remain monogamous pairs, which is a deliberate way to maintain the genetic diversity of the species. Lasher said the program’s current configuration can maintain the genetic diversity of the species for at least the next 100 years. About 22% of the wolves placed in breeding pairs in captivity will produce a litter in a given year, Lasher said.

If the same captive pairs reproduced each year, Lasher said, it would not create the necessary diversity to keep the population going.

“It really was human interference that has made this species go extinct,” Lasher said. “As a conservationist, we feel obligated to try to save this species because it was humans that eradicated it. Legally, it has to be saved also because it is considered endangered under the endangered species act.” 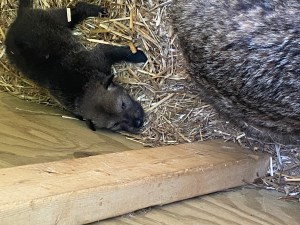 The male wolf pup in the litter opening his eyes.

The red wolf is the apex predator for the Southeast, meaning the wolves were not hunted by any other animal before humans interfered. It helped maintain populations of white tailed deer, raccoons and opossums. Lasher said, as a result, the wolves helped other parts of the ecosystem stay healthy like birds and grasses.

The new pups at Dan Nicholas can be viewed by the general public, if they happen to be out and about, after the park’s animal exhibits reopen.