Wherever wolves hunt, ravens are present, scavenging prey, and sometimes leading upwind wolves to potential prey, or to carcasses too frozen or tough for even the ravens’ heavy, pick-like beaks to penetrate.

Ravens not only scavenge wolf kills, but steal up to one third of a carcass, by continually carrying away chunks of meat, caching and hiding them both from the wolves and their fellow ravens. A fascinating study suggested that, since an adult wolf can, by itself, kill any prey smaller than a small moose, the real reason wolves hunt in packs, is to minimize the portion of a carcass lost to ravens! And while it may seem that wolves have the short end of this symbiotic relationship with ravens, idle wolves and ravens have been observed playing together, with ravens pulling on wolf tails, and wolf pups chasing after teasing ravens

Ravens are cautious and skeptical. In several studies conducted at Yellowstone National Park, where carcasses were randomly left for ravens, it showed them to be initially hesitant, waiting to observe conspecifics or other scavengers feeding first, but when following a wolf pack, they usually began feeding immediately after, and sometimes alongside. Ravens are so clever, they’ve been observed pulling fishing lines out of winter fishing holes, using a foot to stabilize the line, while using the bill to pull to pull the line up.

Much of the success of crows and ravens is due to their diet. They’ll eat pretty much anything, certainly anything we will eat. While most of raven food is scavenged or stolen, they can act predatory, going after everything from insects to newly hatched turtles and small snakes, to immature birds. It is alleged that ravens go after livestock like newborn goats and calves, disabling them by pecking at their eyes, blinding them and ganging up on them, opening wounds around the torso, from which they feed while prey is still alive.

Keep in mind that ranchers and farmers are compensated by the American taxpayer for animals confirmed killed by predators, which makes one wonder whether western ranchers, who appear to have a donation stranglehold on western Senators and Congressmen, are familiar with the phrase “the cost of doing business.” As Bernd Heinrich points out in his highly recommended book, “The Mind of the Raven”, there appears to be no visual record of this raven initiated predation. 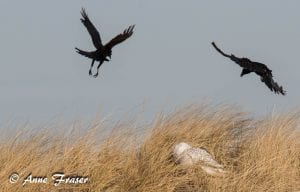 Ravens have been in the New World for about two million years, and while there are at least six different recognized species of ravens in the world, the ravens in North America break down into the California clade, which is found only in the southwestern U.S., and the Holarctic clade, which includes all ravens around the world in the northern hemisphere. The two clades were broken up by Pleistocene glaciers, and proceeded to evolve in their own closely related directions, and while there are small genetic differences, there are none that prevent them from mating. Ravens live in nearly all temperate habitats, including up to twenty thousand feet on Mount Everest!

Owing to their size, ravens have few predators other than great horned owls and eagles, but their nests can be raided by martens and fishers. Wolves, and foxes can be dangerous around carrion, but the ravens are generally too fast to be captured.The great horned owl is the most dangerous predator to the crow, which is why when owls are spotted by crows, they will be harassed and mobbed by murders of crows, intent on driving the owl out of that territory. We have witnessed this firsthand when releasing successfully rehabbed great horned owls.

Ravens must defend a territory successfully, before they can select a site for a nest, which will likely be used by the pair every year until one of the pair dies. Females lay three to seven eggs ranging from February to April, depending on climate, which means earlier in the south and later in the north. Incubation is eighteen to twenty one days, but only the female sits on the eggs. Chicks fledge quickly, within 35 to 42 days, fed by both parents. Mature chicks will leave the nest for good after about six months, In the wild, ravens can live into their twenties, but more typically ten to fifteen years, crows six to eight

Wolves and ravens have long been connected in folklore and fact. The Nordic God Odin is often represented sitting on his throne, flanked by wolves and ravens, Tales of hunting interaction, involving raven, wolf and humans, figure prominently in the storytelling of Tlingit and Inuit, Native American tribes of the Pacific Northwest and Alaska, with the ravens appearing as form-changing wise guys and tricksters, taking advantage of both people and wolves.

My wife Wendy and I run the Adirondack Wildlife Refuge and Rehab Center in Wilmington. In June of 2008, Wendy received a call from a vet’s office in Plattsburgh asking her to pick up a raven that was “anonymously” left at their office. It had some minor problems, an eye and a temporary wing injury. Wendy was unavailable that day, so a friend and fellow rehabber took him home, and then transferred him to Wendy with a collection of stories of her own about this whimsical presence. Questions arose: had he been imprinted or habituated? Wendy called him Abie (AB) because she would recite the alphabet song every time she passed his enclosure, waiting for Abie to kick in, but instead he offered a few choice sounds of his own!

At that time, Our wolf hybrid Cree’s enclosure was located just across the path from Abie’s, so they gradually struck up a friendship. Cree would howl and then Abie would vocalize those odd calypso cocoanutty sounds they make. As Cree would welcome me with a cold wet nose, so Abie would with a nice sturdy peck.

Eventually, it was time for Abie to be soft- released, and we all bid him farewell, already missing his antics. As it turned out, however, he still paid us regular visits. His alarm often sounds at 6 AM, and he returns again at 4 PM to “assist” Wendy with the afternoon feedings of the educational and display raptors. Abie’s contribution to helping us feed was to land on top of the great horned owl enclosure, and drop leaves and twigs on the owl’s head, and sometimes on Wendy’s as well! Abie’s favorite past time was perching on the side of Cree’s pen and hanging out. He later found a girlfriend, who was not as anxious to approach Cree, so Abie’s visits became more infrequent and distant, consisting of exchanging greetings with Cree.