Home › Meet the Board Members of TWIN

Meet the Board Members of TWIN 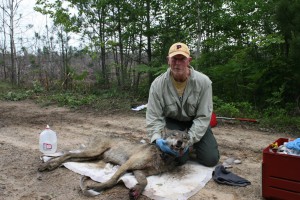 Somewhere on my path to becoming a Wildlife Biologist I got derailed and ended up as an Engineer. No complaints, I’m enjoying a great career – but I’ve never lost my desire to understand the intricacies of the natural world.

I was delighted when gray wolves began colonizing my hunting area in the Central Forest Region in the mid-‘90s – my curiosity about their behavior and dynamics led me to join the WDNR Volunteer Tracker corps. As kind of a natural evolution, I’ve come to be a Regional Coordinator in the program, and wolf monitoring now occupies much of my free time – DNR track surveys in the winter months and radio-collaring and howl surveys in the summertime.

Another avenue of that evolution has been my interest and participation in TWIN – where I’ve met some great like-minded people with a rational perspective towards wolves and a mission to increase acceptance through awareness. I enjoy learning from them, and in turn teaching others.

Bob was a member of the UWSP crew that verified the presence of breeding wolves in Wisconsin, back in the late 1970’s.  They learned to trap, radio-collar, and track wolves in the wilderness areas of far northwest Wisconsin, pioneering modern-day wolf research in Wisconsin.  Bob brings a great deal of historical perspective and biological experience to our TWIN workshops. 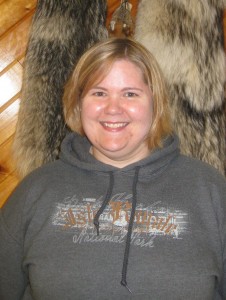 My love of the outdoors and wildlife started 11 years ago under the direction of Dick Thiel and his high school independent study program through Sandhill Wildlife Area. The Sandhill high school independent study is where my volunteer work with wildlife and my progression into TWIN and wolf tracking began. I have been wolf tracking and a part of TWIN for 9 years. Being a part of TWIN has allowed me to meet amazing people who share a passion and love for the outdoors and wildlife like I do. It also allows me to relax and leave all the stress of my nursing job and college behind. 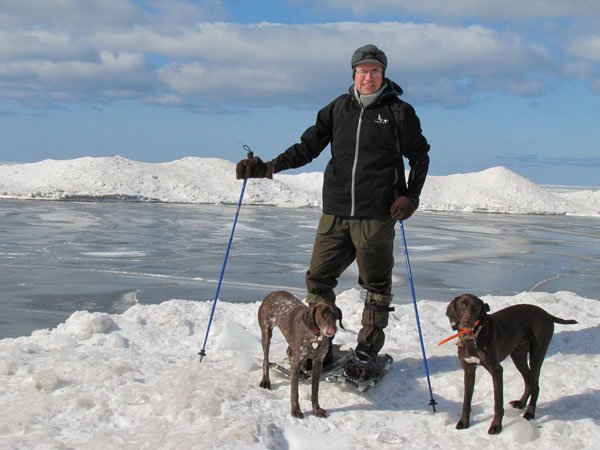 Originally from South Dakota, my interest in nature and the outdoors started when my dad took me pheasant and duck hunting as a kid.  While attending college at the University of South Dakota, I spent my summers living and working in Yellowstone Park.  I closely followed the debate about the re-introduction of wolves in the Park, which finally happened a few years after my last season there.

My degree and career have been in business.  I spent the 1990’s travelling to Asia & Alaska, where I managed franchise operations for Dairy Queen.  I was able to explore wild country in Inner and Outer Mongolia , Alaska and Korea.  But I also saw the impact large human populations in East Asia can have on wildlife. In 2001 we purchased, and continue to run the Dairy Queen store in Eagle River.  Since coming to the Northwoods, my wife Diane and I have been closely watching as the wolf population slowly increased.  In 2010 we became volunteer carnivore trackers for the DNR, and have continued to do this every year since.   We first attended a TWIN workshop in 2014, and have since assisted with the Trees for Tomorrow workshop.

In addition to my involvement with TWIN, I have spent several seasons doing ruffed grouse drumming surveys and we are active with the Ruffed Grouse Society and the Vilas Area Silent Sports Association. 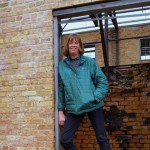 My interest for the gray wolf was sparked by nature photography books in my early years. The   reading of these books led me to many trips to Ely, MN. There, I discovered my first wolf     tracks with my kids and was inspired by the endless beauty and learning experiences this landscape had to offer. At the same time, I developed a passion for photography.

Attending workshops from different nature centers in Wisconsin in the mid 90’s introduced me to many of the people still involved with TWIN. Their passion, stories, teachings, and dedication are what intrigued me to learn more and to educate people.

I have been a small business owner since April of 1992 in the Eau Claire area. In 1997, I became a part of the WDNR Volunteer Tracking program.  I have learned so many things while conducting tracking and howl surveys. These animals have taught me life experiences. I became a Regional Coordinator for parts of NW WI and the Central Forest to try and mentor, inspire and educate people.

This journey has introduced me to endless friendships.  All of us learn something different and unique from each other to pass on.  My goal as a board member is to offer these experiences to people so they may continue to share and teach each other. 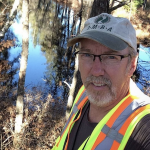 The road that lead me to TWIN was snow covered and unblemished, save for the unmistakable string of large canine footprints leading into the distance.  Tracking, since my younger years, has always fit well into my love of the outdoors.  Tracks and the animals that leave them behind, have fascinated me and I try to spend as much time out among them as possible.

I’ve been a hunter and fisherman, camper and outdoor enthusiast since being introduced to it all over 50 years ago by grandparents and parents.  I hold our natural resources in high regard and try to continue learning and discovering as much as I can.  After a career in education,  I turned to wildlife professionally as a technician with the Ho-Chunk Nation Division of Natural Resources. As a volunteer carnivore tracker previously (and currently), I looked forward to closer engagement with fascinating species like wolves, elk and other wildlife.  Tracking, trapping, collaring and monitoring, were all a part of  the job-and one I relished.  I’ve continued this second career in the Wisconsin DNR Bureau of Wildlife Management working mainly on public lands in the central forest and the Black River State Forest.

After attending a TWIN workshop years ago, I realized their science based outreach was something I was drawn to. With so many players on all sides of wolf management, it was refreshing to have the ecology of this species presented as the core of an unbiased and professional mission.  TWIN members are passionate, authentic and knowledgeable with a like-minded enthusiasm for educating others.  I’m proud to serve on the board and strive to advance the success of TWIN and to continue cultivating friendships among TWIN members and students of our workshops. 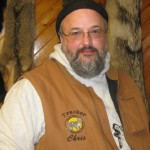 I came to Central Wisconsin in the late 1970’s to pursue a degree in forestry, which I did, but ended up staying.  In the early 80’s I was fortunate to see two wolves crossing a field during winter time in the northeastern part of Portage County.  I was hooked.  In 1989 TWIN starting offering the study of wolves’ workshops at Treehaven.  After being put on a waiting list to attend for several years I got my chance. After that experience I joined TWIN. as a member at large.  I also started attending Board meetings where I met people who shared my passion and interest.  Shortly after that I ran for the Board of Directors and have served almost continually since 1996.  I also joined the DNR Volunteer Tracking program.  I had great teachers to learn from in the TWIN leadership.

Flash forward to present day.  What I learned from my experiences with TWIN helped me to become a regional coordinator in the tracking program and field tracker for the annual TWIN at Treehaven workshop.  I have also been involved in summer wolf howl surveys for the past 20 years.  My work life is not in wildlife science but my experiences with wolf monitoring have fed my interest in natural resources.  I look forward to continuing my involvement with wolf monitoring for years to come and hope I can inspire you to get involved too.